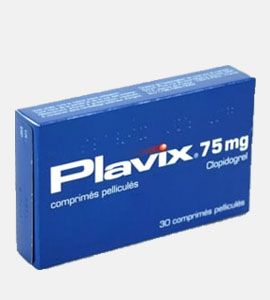 Description
Common use
Specifically and actively inhibits aggregation of platelets (clotting) and dilatates coronary vessels. Plavix is used to diminish the risk of heart attacks and strokes caused by blood clots is increased in patients with a recent history of stroke, heart attack and peripheral vascular disease. It is used to prevent ischemic disorders like myocardial infarction, stroke, thrombosis of peripheral arteries and others.
Dosage and direction
Plavix should be taken once a day with or without food.
Precautions
As Plavix belongs to 'blood thinners' avoid taking it with aspirin or other NSAIDs (non-steroidal anti-inflammatory drugs) if your doctor did not recommend you to do it. Contact your doctor if you discovered that you have black or bloody stools, vomit that is similar to coffee grounds or if you cough up blood.
Contraindications
Hypersensitivity, severe liver failure, acute bleeding, ulcer of stomach or duodenum, ulcerous colitis, tuberculosis and other diseases predisposing to bleeding, pregnancy, breastfeeding, neonatal period. Caution should be exercised in patients with moderate liver of kidney failure.
Possible side effect
Bleeding in stomach or guts, hemorrhagic stroke, neutropenia, thrombocytopenia, abdominal pain, dyspepsia, gastritis, constipation, ulcers in the gastrointestinal tract, diarrhoea, allergy.
Drug interaction
The combination of Plavix with non-steroidal anti-inflammatory drugs may cause risk of stomach and intestinal bleeding the same as a high concentration of Plavix increase concentration of Coumadin if they are used concurrently and lead to excessive bleeding.
Missed dose
Never take a double dose of this medication. If it is almost time of the next dose just skip the missed portion and continue to take the medicine according to the schedule.
Overdose
Symptoms of an overdose are vomiting, feeling exhausted or shortness of breath, and signs of blood in your stools or vomit, diarrhoea, rash, itching. In case of serious manifestation of these adverse reactions call your doctor immediately.
Storage
Store Plavix tablets and capsules should be stored at room temperature between 15-30 C (59-86 F).