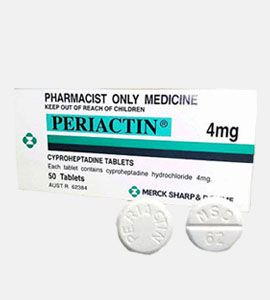 Periactin medication is a tableted drug, an antagonist of histamine and serotonin. It is prescribed in the treatment of anorexic conditions, with exhaustion caused by a lack of appetite.
In the US, the drug is most often prescribed for the treatment of symptoms associated with allergies: hay fever, runny nose, eye irritation, urticaria, and edema. In addition, the drug is approved for the treatment of anaphylactic reactions caused by allergens, often as an adjunct to epinephrine injections.
Periactin is an antagonist of serotonin and histamine and has the ability to stimulate appetite. This feature provokes the mass use of the drug, not for its intended purpose, but as a means to increase weight, especially in patients suffering from muscle loss associated with AIDS, cancer or other debilitating diseases.
Thus, the drug is used to treat allergic diseases (acute and chronic urticaria, serum sickness, pollinosis, vasomotor rhinitis, contact dermatitis, neurodermatitis, angioedema, allergic reactions to medication, etc.), as well as with migraine (mainly due to the antiserotonin effect), loss of appetite of various etiologies (neurogenic anorexia, chronic diseases, etc.). Due to the fact that histamine and serotonin increase the secretion of pancreatic juice, it has also been proposed to use Periactin in the complex therapy of chronic pancreatitis.
Periactin dosage and intake. To increase the appetite, adults are prescribed 1 / 2-1 tablet 3-4 times a day or 1-2 teaspoons of syrup 3-4 times a day; children from 2 to 6 years old - no more than 2 tablets or 4 teaspoons of syrup per day; children from 6 to 14 years old - no more than 3 tablets or 6 teaspoons of syrup per day.
As for Periactin side effects, it should be mentioned that drowsiness, dry mouth, in rare cases - anxiety, ataxia, dizziness, nausea, skin rash may occur.