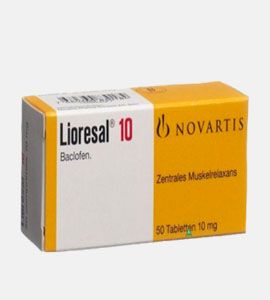 The drug Lioresal is a centrally acting muscle relaxant. It is an analogue of GABA (gamma-aminobutyric acid), which is a natural mediator involved in the inhibition of nerve impulses in the central nervous system (brain and spinal cord). The drug contains the substance baclofen.
Lioresal medication is used to treat:
•  increased skeletal muscle tone in multiple sclerosis
• increased tone in cerebral palsy.
Lioresal with blood flow reaches the spinal cord, its GABA receptors. There it suppresses special reflex reactions, which allows you to block the transmission of excitation along the nerve endings. As a result, there is a decrease in muscle tone, a decrease in single muscle twitches, a decrease in pain, a normalization of movements in the spine. Also, the drug can normalize sleep and work of the pelvic organs, if problems are caused by diseases of the spine.
As a special effect, the Lioresal pill has a sedative effect, up to and including drowsiness, and somewhat depresses respiratory functions. This should be considered when driving vehicles and in the presence of diseases of the respiratory system.
There are also special directions for treatment with this medicine. Selection of an individual daily dose of the drug Lioresal is recommended to be carried out in the hospital. The drug enhances the effect of drugs that inhibit the central nervous system, drugs that reduce pressure and alcohol. With simultaneous use of Lioresal with tricyclic antidepressants, a significant reduction in muscle tone is possible.
Thus, this medicine is used to normalize the functions of the musculoskeletal system, however, patients must observe rationality in its use.