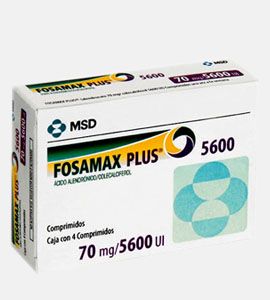 This product is currently viewed by 7 users.

Description
Fosamax belongs to the group of bisphosphonates. Being localized in the foci of bone resorption, the substance lowers the activity of the main cells involved in the resorption process - osteoclasts, thereby inhibiting the destruction of bone.
Since the resorption and the formation of new bone tissue are interrelated, the restoration of the bone also decreases, but this occurs to a lesser extent than destruction. As a result, a positive balance is restored and a progressive increase in bone mass occurs.
Fosamax stimulates an increase in the mineral density of the bone tissue of the spine and other elements of the skeleton and contributes to the formation of a normal histological structure during bone repair.
Indications for use
Fosamax is indicated for use in postmenopausal osteoporosis (to reduce the risk of developing femoral neck fractures and compression fractures of the spine), as well as in osteoporosis caused by the use of glucocorticosteroids.
Contraindications:
• Conditions characterized by slow food progression through the esophagus (including achalasia of the cardia or stricture of the esophagus);
• Low calcium in the blood plasma;
• Severe renal impairment (creatinine clearance less than 35 ml/min);
• Inability to sit or stand straight for 30 minutes or more;
• Severe disorders of mineral metabolism;
• Pregnancy and lactation;
• Childhood;
• Increased individual sensitivity to any component of the drug.
Instructions for usage of Fosamax
Fosamax tablets should be taken orally with water, not less than 30 minutes before the first meal, drink or other drugs. The recommended dosing regimen is one tablet of 10 mg once a day or one tablet of 70 mg once a week.