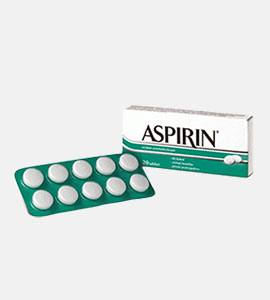 Description
Pharmacological effect
After taking acetylsalicylic acid into the body, hyperemia is reduced, capillary permeability at the site of inflammation decreases - all this leads to a noticeable analgesic and anti-inflammatory effect. The drug quickly penetrates into all tissues and fluids, absorption occurs in the intestine and liver.
Action of acetylsalicylic acid:
• Reduces fever, while not affecting normal performance;
• Eliminates the pain of low and medium intensity;
• Acetylsalicylic acid dilutes the blood, violates the aggregation of platelets - reduces the load on the heart muscle, reduces the risk of a heart attack;
• Provides lasting anti-inflammatory effect 24–48 hours after the start of medication.
The drug can be taken to prevent thrombosis, stroke, reduce the risk of circulatory disorders in the brain.
Indications for use
What helps these pills? Indications for acetylsalicylic acid are:
• Febrile syndrome;
• Ischemic heart disease, thromboembolism, atrial fibrillation and myocardial infarction (as a prophylactic agent);
• Acute rheumatic fever, rheumatic chorea, Dressler's syndrome, rheumatoid arthritis;
• Spinal diseases that are accompanied by pain syndromes (lumbago, sciatica, osteochondrosis);
• Migraine, as well as headaches, joints, muscle, menstrual and toothache, neuralgia, osteoarthritis;
• Acute thrombophlebitis, pulmonary infarction.
Contraindications
Tablets can not be taken in the case of:
• The Aspirin Triad;
• Hemophilia;
• Hypoprothrombinemia;
• Vitamin K deficiency;
• Renal and / or liver failure;
• Deficiency of glucose-6-phosphate dehydrogenase;
• Children under 15 years old;
• Reye's syndrome;
• Portal hypertension;
• Hemorrhagic diathesis;
• Dissecting aortic aneurysm;
• I and III trimester of pregnancy, as well as lactation;
• Hypersensitivity to salicylates, including acetylsalicylic acid;
• A history of urticaria, rhinitis, caused by taking this drug and / or other nonsteroidal anti-inflammatory drugs;
• Exacerbations of erosive and ulcerative lesions of the gastrointestinal tract;
• Gastrointestinal bleeding;
With caution, under close medical supervision, the drug is used for liver and kidney diseases, gastrointestinal problems in history, bronchial asthma, increased bleeding, decompensated chronic heart failure, during the second trimester of pregnancy and during anticoagulation therapy.
Instructions for use
The instructions for use indicate that acetylsalicylic acid tablets are intended for oral administration, preferably after meals, with milk, plain or alkaline mineral water.
The adult recommends using acetylsalicylic acid for adults 3-4 times a day, 1-2 tablets (500-1000 mg), with a maximum daily dose of 6 tablets (3 g). The maximum duration of acetylsalicylic acid is 14 days.
In order to improve the rheological properties of blood, and also as an inhibitor of gluing platelets, ½ acetylsalicylic acid tablets per day are prescribed for several months. For myocardial infarction and for the prevention of secondary myocardial infarction, the instruction for acetylsalicylic acid recommends taking 250 mg per day. Dynamic disorders of cerebral circulation and cerebral thromboembolism involve taking ½ acetylsalicylic acid tablets with a gradual reduction of the dose to 2 tablets per day.
The duration of treatment (without consulting a doctor) should not exceed 7 days when prescribed as an analgesic and more than 3 days as an antipyretic.
Under the supervision of a physician, acetylsalicylic acid is prescribed for children in the following single doses: over 2 years old - 100 mg, 3rd year of life - 150 mg, four years old - 200 mg, over 5 years old - 250 mg.
Side effects
Before using acetylsalicylic acid tablets, the patient should consult a doctor. If you exceed the dose or uncontrolled and long-term use of this drug may develop the following side effects:
• Impaired visual acuity;
• Bleeding - intestinal, nasal, gingival, stomach;
• Pains in the field of epigastria, nausea, vomiting;
• Diarrhea;
• Dizziness and weakness;
• Loss of appetite;
• Development of acute renal failure;
• Bronchospasm, in severe cases, the development of angioedema and anaphylactic shock;
• Changes in the clinical picture of blood - reducing the amount of hemoglobin and platelets;
• Liver and kidney problems